01- First of all, Randis, congratulations for your victory! You won a trip to the Final Fantasy Distant Worlds concert in Paris France and your name will be included in the end credits for Lightning Returns: Final Fantasy XIII! How does it feel being officially recognized as the biggest fan of the most famous RPG series in the world?

The two feelings that I had when the results came out were happiness and gratefulness. I feel very grateful for all the support I got and very happy to get the chance to meet one of the people who has originally worked on the games that were a great part of my childhood.
Of course I have also felt proud for the recognition of my artistic side and the chance to show my collection to many people. Collecting is only fun if you can share it with others.

03- A classic question: what is you favorite Final Fantasy and the one you like the least? And why? – if you are able to tell.

This is not an easy question because I like many of the FF titles for different reasons so here is my Top 5:

1) FFVI – This game has it all, awesome characters, great story, beautiful OST and lots of optional content and characters. I really love the setting and the art in this game.
2) FFVII – When it first came out, I hated it for a brief time because Yoshitaka Amano was no longer the character designer for this game and the work of Yoshitaka Amano for me is an important part of what makes out Final Fantasy. Also the Final Fantasy 64 demo did set certain expectations and I was hoping for a game that continued the story of FFVI. But as I started playing the game it really grew on me very quickly, the developer teamput a lot of love and effort into it.
3) Final Fantasy Tactics (for PS1) – Even though this is not one of the main FF titles, this game is still very dear to me.
FFT has a beautiful story and great characters and as an Ogre Saga and FF fan this game was like a dream come true for me. I love the tactical gameplay and all the optional content.
4) FFXI – Being an online title, this game of course is very different from the offline FF games, but looking back at the hours I spent playing it I can easy say that I have played it longer than all the other FF titles together. Playing with other people is fun and this game is simply addictive.
5) FFIV – Lots and lots of nostalgia, iconic characters and cool story. FFIV is a great game.

Final Fantasy X-2 is my least favorite FF game. FFX was a great game but X-2 and X-2 + Last Mission did alienate me… I like the FFX-2 Horu gun controllers though, they are cool.
There are other FF titles that I don’t like as much but despite what others say, I do not hate them. As games they are all good, but as FF title I just don’t like them as much.

04- And another classic one: what is your favorite FF character?

05- What do you like the most about Final Fantasy and what are in your opinion the elements that make a Final Fantasy game (i.e. Summons, the combination between magic and technology, charming characters…)?

I like the Quality of the games. FF titles are always well rounded and polished, both artistically and technically. There are never disappointing elements like long loading times, boring battle system, bad story or poor music. And I really liked the optional content in the older titles, such as extra characters, hidden items and so on. I very much appreciate that with every new title the developers try to innovate the technology while keeping at the same time certain elements that have developed over the time, such as Chocobos, Moogles, characters like Cid, Wedge, and certain music tracks.

06- What are your favorite games other than Final Fantasy?

07- How big is your collection and where do you keep it?

It’s not small. I guess I still need to make more photos, because so far I only showed about 60% of my FF collection on my albums and Facebook. I keep it in my home office.

08- Where did you buy all this stuff? Did you have to import most of it?

I had to import most of my things, but also bought a lot from gameshops (those that sell imports).

09- Do you think it will ever come the day on which you will think: “My collection is now complete”?

Well, that depends on Square Enix, I guess. As long as they produce contents, it can never be complete. But to be honest, I don’t really buy FF items to have a complete collection, there are also items I do not buy because I don’t like them.

10- What is the piece you wanna add to your collection at all costs (if there is one)?

I am looking for the Potelong FF-XIII-2 snack, I have somehow missed the promotion that was going on in japan. It is a potato snack with a FF lable. It may sound lame but I like such unusual items the most. FF Cola bottles, Chocobo snacks, FF OSTs on cassettes, vinyl records, movie film rolls – I like these things.

11- Do you collect anything other than FF-related stuff?

12- Were you able to play to Final Fantasy Type-0? As you know, it’s been more than one year since the release of the game in Japan, and fans are still waiting for a Western localization. Do you know Operation Suzaku and the petition that started a few months ago? What do you think about it? Will Square Enix bring Final Fantasy Type-0 to North America and Europe?

I did play the game a bit, I have the collector’s edition but as I don’t speak Japanese I’d rather wait and hope than playing it blindly. I really love Bump of Chicken’s music tracks. I am hopeful that this game will be translated and released outside of Japan, but I think it will be destined to a different platform than PSP – maybe Vita or even a home console. I guess this could be the reason why the Western release is taking so long.

13- Are true fans able to make criticisms? If that is a yes, do you criticize Square Enix for something?

Most certainly! A true fan always criticizes a lot! Being a fan is not the same as being a ‘fanboy’ who would blindly take whatever comes out. Well, what do I criticize…? Maybe first I should explain that my priorities are a bit different, as one would expect that I would right away start off with Versus and Type-0. I am a working professional and there are times when I am so busy that I simply don’t have the time to play, so for me there is really no hurry for the release of certain titles, because I still haven’t got the time to play some of the titles that have already come out!

I was a bit disappointed with the setting and character races in FFXIV. I love FFXI, don’t get me wrong, but I really hoped for something completely new, while the world and the characters feel rather familiar.

Speaking of offline FF titles, I would like to see more mature and interesting characters in the next titles. I would like to see more characters like Barret (FFVII), Cyan, shadow, Edgar (FFVI), Orlandeau (FFT). I don’t want every character to be beautiful and look like a teen popstar. I also did not like the changes to Barret in Advent Children – this is not the Barret I know.
Also I was very sad with what happened to the FF Tactics series: the first part has such a beautiful story and setting, I loved the serious plot a lot! FFTA and A2 are great games but the story and many of the characters put me off a bit, I think it is too childish in comparison with FFT.
Personally I would hope for more quality control regarding the franchise: there are many items that simply do not interest me. Some items are very cool and when I got them I was excited and happy – for example, I really love my FF watches (I wear them a lot), the Moomba mug, the Chocobo clock and many of the toys – but there are also many items that feel uninspired and boring. I am not very interested in FF perfumes or candles for example. Don’t get me wrong, if the candles would look like they come from some FF dungeon, I would love them, but they are just plain candles with some logo.
I also don’t like that all the figures/models from different FF titles have a different scale! They don’t look nice at all standing next to each other and also I would not mind if there were a lot less of them.

14- What is your most anticipated upcoming S-E title?

I can’t wait to ride my legacy Chocobo in Final Fantasy XIV: A Realm Reborn. I really want to see this game succeed! 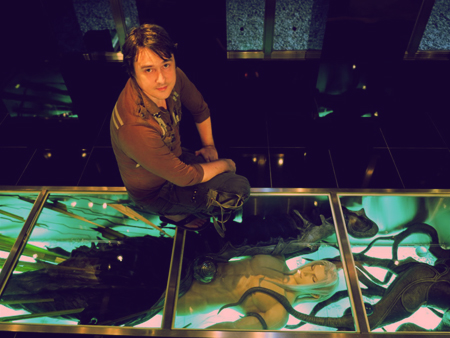 – My collection was featured on Square Enix official website a couple of months ago: http://i.imgur.com/Nlaym.jpg. It may have sparked the interest for the FF Superfan Contest.

– My trip to the FF 25th Anniversary event in Japan: http://imgur.com/a/SwaI2

– Me visiting the SE Showcase in Tokyo: http://imgur.com/a/wJcYS